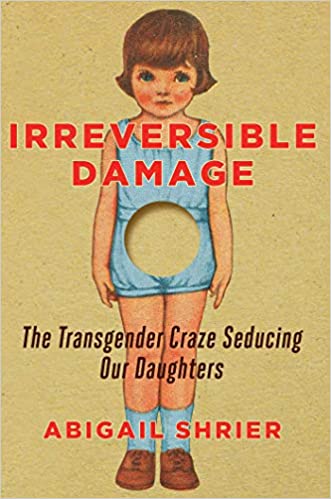 “In America and across the Western world, adolescents were reporting a sudden spike in gender dysphoria—the medical condition associated with the social designation “transgender.” Between 2016 and 2017 the number of gender surgeries for natal females in the U.S. quadrupled, with biological women suddenly accounting for—as we have seen—70 percent of all gender surgeries.1 In 2018, the UK reported a 4,400 percent rise over the previous decade in teenage girls seeking gender treatments. In Canada, Sweden, Finland, and the UK, clinicians and gender therapists began reporting a sudden and dramatic shift in the demographics of those presenting with gender dysphoria—from predominately preschool-aged boys to predominately adolescent girls.” […]

“And Teen Vogue routinely educates girls that gender is a social construct. “The truth is, not all women menstruate and not all people who menstruate are women,” one article blithely informs readers, as if that were factual.” […]

“Transgender influencers coach other adolescents on how to wheedle a testosterone prescription from a skeptical clinician.” […]

“Her daughter just didn’t seem like “a boy trapped in a girl’s body.” She seemed like a girl who had had a lot of trouble fitting in with peers, who had been introduced to an explanation and latched onto it.”

“There is nothing crueler, more “toxic” to trans gurus than parents who fail to jump on board with each step of gender transition and every tenet of gender ideology.” “[…]

“Many of them peddle misinformation, outright medical falsehoods, and just bad advice. They extol the glories of testosterone as if it were a protein shake, not a Schedule III controlled substance. They enthuse over double mastectomies as if they were of no more significance than a haircut. They refer to skeptical parents as “toxic”—and encourage their audience to upgrade to a trans “glitter family.”

Journalist Abigail Shrier’s Irreversible Damage: The Transgender Craze Seducing Our Daughters is an exploration of a mystery: Why, in the last decade, has the diagnosis “gender dysphoria”, transformed from a vanishingly rare affliction, applying almost exclusively to boys and men, to an epidemic among teenage girls?

Teenage girls are taking courses of testosterone and disfiguring their bodies. Parents are undermined; experts are over-relied upon; dissenters in science and medicine are intimidated; free speech truckles under renewed attack; socialized medicine bears hidden consequences, and an intersectional era has arisen in which the desire to escape a dominant identity encourages individuals to take cover in victim groups.

Author Abigail Shrier presents shocking statistics and stories from real families to show that America and the West have become fertile ground for a “transgender craze” that has nothing to do with real gender dysphoria and everything to do with our cultural frailty to not question an ideology based on post-modern nihilism and political correctness.