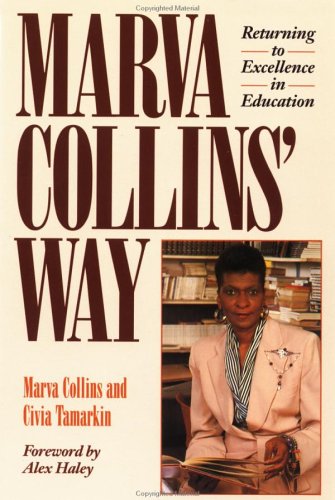 “Marva Collins taught school for two years in Alabama, then moved to Chicago, where she taught in public schools for 14 years. Her experiences in that system, coupled with her dissatisfaction with the quality of education that her two youngest children were receiving in prestigious private schools, convinced her that children deserved better than what was passing for acceptable education. She took the $5,000 balance in her school pension fund and opened her own school on the second floor of her home. The Westside Preparatory School was founded in 1975 in Garfield Park, a Chicago inner-city area. During the first year, Collins took in learning disabled, problem children and even one child who had been labeled by Chicago public school authorities as borderline retarded. At the end of the first year, every child scored at least five grades higher proving that the previous labels placed on these children were misguided.  60 Minutes, visited her school for the second time in 1996. That little girl who had been labeled as borderline retarded, graduated from college Summa Cum Laude. … Marva’s graduates entered colleges and universities, such as Harvard, Yale, and Stanford. They became physicians, lawyers, engineers, and educators.”