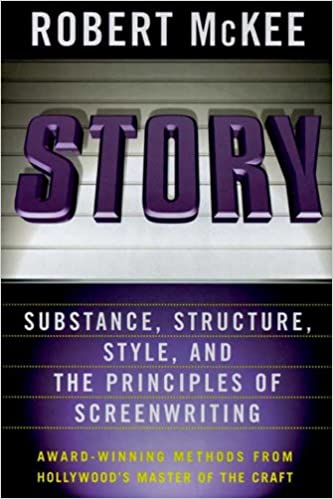 “A character is no more a human being than the Venus de Milo is a real woman. A character is a work of art, a metaphor for human nature. We relate to characters as if they were real, but they’re superior to reality. Their aspects are designed to be clear and knowable; whereas our fellow humans are difficult to understand, if not enigmatic. We know characters better than we know our friends because a character is eternal and unchanging, while people shift – just when we think we understand them, we don’t.” […]

“Who are these characters? What do they want? Why do they want it? How do they go about getting it? What stops them? What are the consequences? Finding the answers to these grand questions and shaping them into story is our overwhelming creative task.” […]

“True character is revealed in the choices a human being makes under pressure – the greater the pressure, the deeper the revelation, the truer the choice to the character’s essential nature.”  […]

“Most of life’s actions are within our reach, but decisions take willpower.” […]

“Difference for the sake of difference is as empty an achievement as slavishly following the commercial imperative.” […]

“Nothing moves forward in a story except through conflict. Writers who cannot grasp this truth, the truth of conflict, writers who have been misled by the counterfeit comforts of modern life into believing that life is easy once you know how to play the game.” ― Robert McKee,

Story: Style, Structure, Substance, and the Principles of Screenwriting by Robert McKee is an integrated explanation of the craft of writing for the screen.