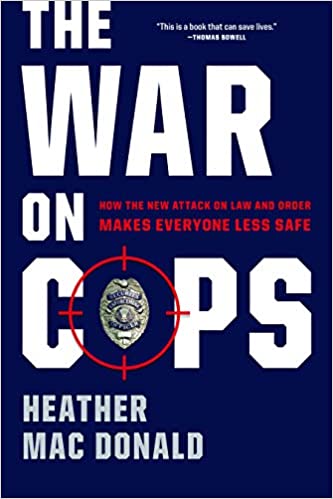 The War on Cops by Heather Mac Donald

“This book challenges the premises of the growing crusade against law enforcement. In Part One, I rebut the founding myths of the Black Lives Matter movement—including the lie that a pacific Michael Brown was gunned down in cold blood by Officer Darren Wilson in Ferguson, Missouri, in August 2014. I document the hotly contested ‘Ferguson effect,’ a trend that I first spotted nationally, wherein officers desist from discretionary policing and criminals thus become emboldened. In Part Two, I outline the development of the misguided legal push to force the NYPD to give up its stop, question, and frisk tactic. In Part Three, I analyze criminogenic environments in Chicago and Philadelphia and put to rest the excuse that crime—black crime especially—is the result of poverty and inequality. Finally, in Part Four, I expose the deceptions of the mass-incarceration conceit and show that the disproportionate representation of blacks in prison is actually the result of violence, not racism.” — Heather Mac Donald